A simple Augmented Reality football game meant to be used on business cards to demo AR to potential customers and partners. The game is meant more as a tech-demo than an actual game and as such fitting features like multiplayer have not been implemented. 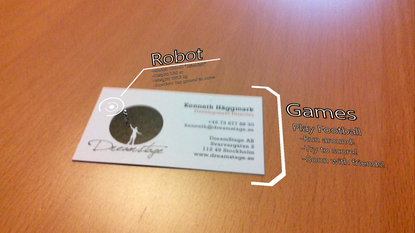 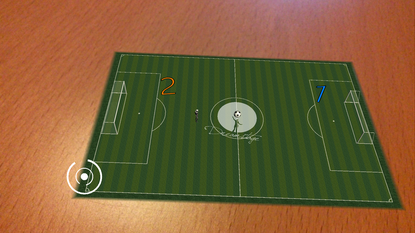 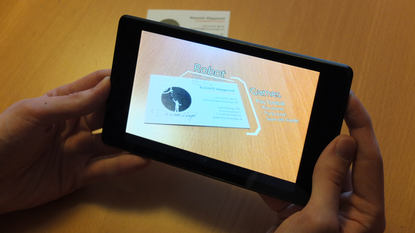 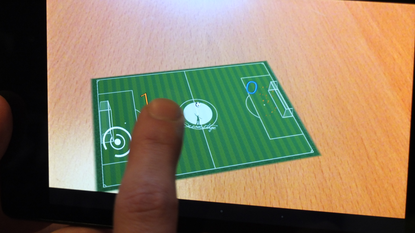 Controlling and navigating the game

When the player firsts looks at the business card through their phone they will see a robot standing on the card, a spinning icon with some info-text about the robot next to it and some text next to the card prompting the player to play football. The player can either tap anywhere on the card to move the robot, tap the spinning icon to toggle the robot-info or tap the prompt for playing football to change to the football game.

When changing to the football game the robot is teleported away and both the spinning icon and the text smoothly disappears through animations. A few seconds later the business card opens up, imitating two hidden sliding doors, and a football field is raised through the opening to the top of the card. A number indicating score appears above each of the goals and the robot as well as a football is teleported in. In the lower left corner a spinning icon similar to the one from the previous scene appears and if the player presses it will ask the player if they wish to return to the menu.

The player is now free to run around and try to score on any of the goals, succeeding to do so will reward the player with applause and of course increase the score for the appropriate team. If the player manages to launch the ball of the edge or run off themselves they will soon be teleported back to the field.

All art assets except the icons are either bought from the Unity Asset Store or are included in Unity's standard assets. The robot uses root motion in order to look as realistic as possible when running around.